The pursuit of the ‘preferred answer’ starts early in life. Any two-year old knows to ask Dad after Mom says, “No.” In forestry and the forecasting of timber markets, comparing approaches, like getting a second opinion, strengthens our collective understanding, even while exposing uncomfortable truths. To start, results must make sense, and they must align with the strongest, available, verified facts.

Consider the accumulation of forest supplies in the U.S. South. We have written about the broader forest supply-wood demand story before, and how the South now has a higher baseline forest inventory. Here I focus on the dynamics of planting (supply) and harvesting (demand) trees, which drive the forest cycle in active, private markets for wood and timber.

The age structure of today’s forest inventory reflects the timing and responses of past policy and market surges and flows (Figure 1). The first surge in planting in the 1950’s corresponds with the Soil Bank Program, and the second wave of activity in the 1980’s ties to the Conservation Reserve Program (CRP), in which the USDA encouraged landowners to plant trees on former fields and agriculture lands. Timber rotations in the South average 25-30 years, and the recession affected the planting cycle by aligning with the arrival (the “echo”) of the CRP-subsidized plantations from the 1980s.  The effects magnify each other, as a major decrease in harvesting activity fed already strong inventories planted 30 and 60 years ago as part of federal incentive programs. 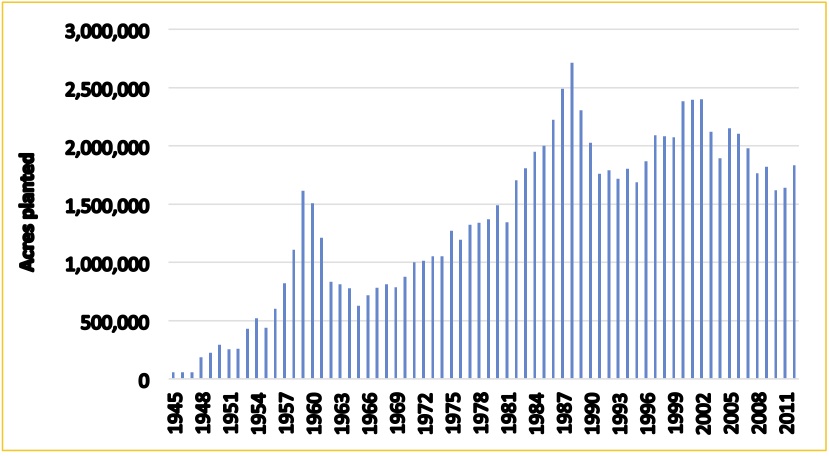 What does this mean? It’s the Baby Boomer Generation of tree growth. The demographics and population dynamics of the forest have a pattern. Any projection that fails to account for the “pig in the python” of tree planting fails basic reason. We planted a lot of trees, and we deferred a lot of harvesting. And tree growth, like money in a savings account, compounds.

The implications vary by state and local market. While states such as Georgia and Texas with sawmills closer to end markets have seen harvesting and wood flows increase along with improved housing markets, Gulf and Central States such as Louisiana, Mississippi and Alabama, with smaller populations and less home construction, have lagged. As an example, let’s look at the harvest patterns for pine grade in Mississippi and the actual wood flows to assess the current baseline.

Planting (supply): Mississippi significantly increased its participation in the CRP program in the late 1980s, going from 81 thousand enrolled acres in 1986 to over 701 thousand acres by 1990, an annual growth rate exceeding 50%. That helped put a lot of new trees in the ground. 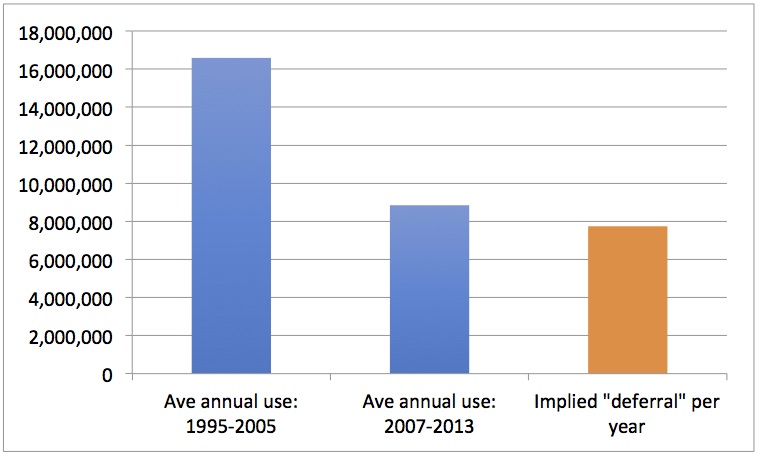 So what do the physical facts associated with deferred harvests imply for total forest growth in Mississippi? Assume we averaged 7.7 million tons of deferred harvest per year from 2007 through 2016. And like money in a savings account, deferred harvests can grow at a compounded rate (Figure 3). Delayed harvests, juiced by previous planting and “in growth” (younger trees moving up through the product classes), and allowed to compound provides a physical story, regardless the assumptions on conversion rates or parcelization or logging capacity. US Forest Service data confirm forest growth rates of 4% or 6% or 8% or more, depending on the specie, owner, location and timeframe. And assuming 8%, we have a story growing Mississippi’s pine grade inventories at 15 million tons per year. 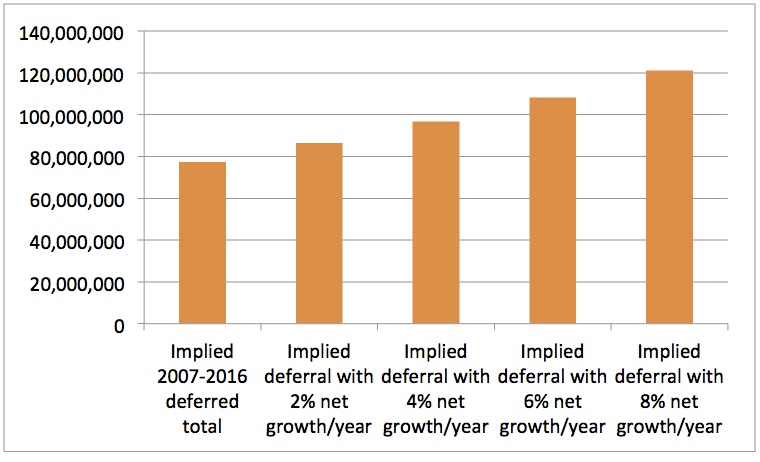 Over time, we have stripped down and simplified our forecast models to the core drivers, building on knowable physical facts that produce “transparent” results. Transparency, in this context, means the results clearly and directly tie to what we know about how things work on the ground, such as planting and harvest patterns. A complicated or sophisticated model, for these applications, may or may not clarify key drivers. The goal of the exercise is to support decision making through a better understanding of how changing supplies affect timber prices and wood costs.