This is the fifth in a series related to the Q2 2020 Forisk Research Quarterly.

Wood use for viable bioenergy projects in the U.S. could reach 79 million tons per year in 2029. Regionally, the South accounts for 56% of the potential wood use for bioenergy.

As of April 2020, Forisk’s wood bioenergy database tracks 422 operating and announced projects. These projects represent potential wood use of 99 million tons per year by 2029. Based on Forisk’s analysis, 276 projects pass basic viability screening, indicating potential wood use of 79 million tons per year. In comparing project viability by region, we find only 60% of announced and operating projects in the South pass Forisk screening, while the North and West reach 69% and 68%, respectively. The South leads the United States in bioenergy investment as measured by potential wood use. In part, this reflects the longer history of in-place and smaller operating projects in the North and West; larger projects locate in the South for reasons of scale, availability of resources, and access to ports and markets. 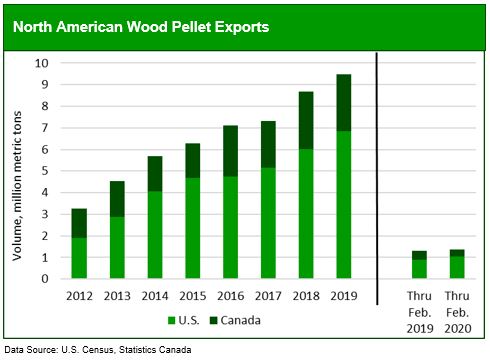 U.S. wood pellet exports increased 14% in 2019. The UK remained the largest importer of U.S. wood pellets with 78% of total U.S. volumes. The UK imported 5.33 million metric tons of wood pellets from the U.S., a 13% year-over-year increase. Export volumes to the UK are expected to continue to rise with the completion of MGT Power’s 299 MW CHP facility. Construction was halted in March, however, as a result of the coronavirus. Enviva has the off-take contract to supply the plant with one million metric tons of wood pellets annually. Through February 2020, U.S. wood pellet exports were up 18% year-over-year, driven by demand from the UK and Belgium.

Increased Canadian wood pellet exports to Belgium and the UK nearly offset declines to Japan, South Korea, Italy, and the Netherlands. The UK remained the largest importer of Canadian wood pellets with a 63% market share. Through February 2020, export volumes were down 24% year-over-year, with all countries declining.