This is the sixth in a series related to the Q4 2019 Forisk Research Quarterly’s (FRQ) forest industry analysis and timber price forecasts for North America. 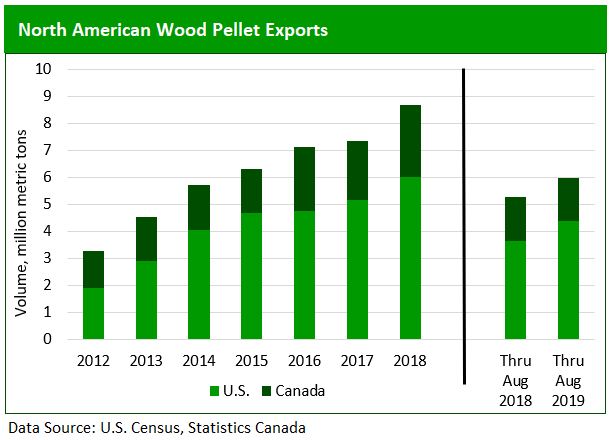 Canadian wood pellet exports declined 1.3% year-over-year through August 2019. Export growth to Belgium offset a 6.8% year-over-year decline to the UK. As with the U.S., the UK remained the largest importer of Canadian wood pellets with 61% of the market share. Pinnacle, Canada’s largest pellet producer by capacity, continued to struggle with fiber availability and quality as a result of sawmill curtailments in British Columbia. The company noted Q3 production was down 14% year-over-year.

As new demand for industrial wood pellets in Europe has slowed, growth prospects have shifted to Asia. 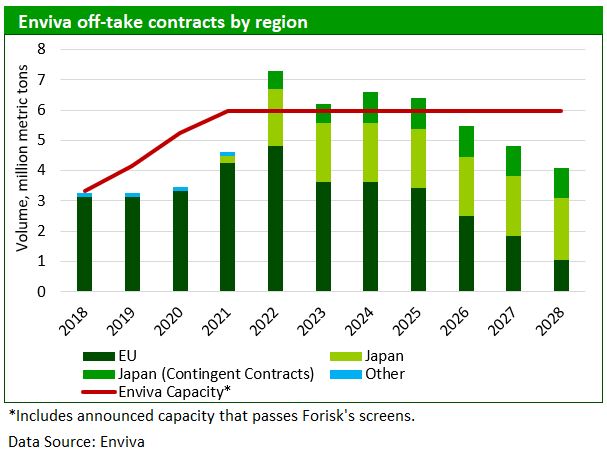 Enviva, the world’s largest producer of wood pellets, has announced long-term off-take contract volumes to Japanese counterparties, which will approach two million metric tons per year by 2023 and an additional one million metric tons of contingent off-take contracts by 2024. Should these contracts become firm, Japan will be the leading destination for Enviva’s exports in 2026. Contracted volumes to the EU will trend lower after 2022. Given the increased contracted volumes expected in 2022, Enviva is bringing over 2.6 million metric tons of new capacity online between 2019 and 2021. Despite the increase, Enviva could be “short” production capacity in 2022; additional capacity is likely.